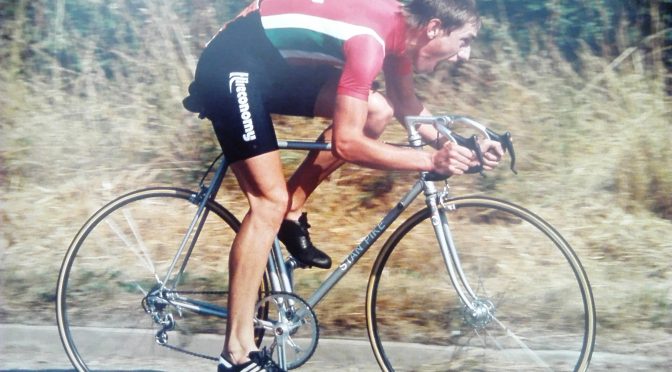 Tim Stevens contacted me with details of his Stan Pike. He said…

As a young time trialist I was an admirer of John Woodburn and Pete Wells who both rode Stan Pike bikes. John won the 1978 BBAR on his light blue Pike, badged Ken Ryall. Pete worked at Don Farrell’s shop for a while in his younger days and owned several SPs ; the picture of him on this website shows him winning the ’78 National 100.

On 6th May 1981, and after much consideration, I ordered my bike from Broadway Bikes at Enfield (the nearest shop to my home which was a Pike agent was ). Made from Reynolds 753 throughout, I had previously had a bike made from Columbus PL,  but it was too fragile and flexed.

It has a 23 inch seat tube, 74 degree parallel with the head tube. I wanted a very close clearance at the rear end as I used Clement No 3 silk tubulars or 18 mm  narrow section Wolbers. Therefore I left it to Stan to keep the chain stay as short as he could get away with. The front end was to be close too, a 1 inch fork rake was specified. The trend at the time was for a close clearance upright frame, because it made the bike feel lively and also kept the weight down as the tubes were that bit shorter. A semi sloping fork crown was deemed to be lighter which is in effect cut out and not a solid piece of metal. A clever little touch I chose to save weight is to have half of a Weinmann 500 brake spindle brazed onto the fork crown and rear bridge, as well as a neater appearance it eliminated nut and washer to secure the brake assembly. Similarly a Campag gear lever boss brazed onto the down tube. I used a 5 speed Mailllard  dural block 13-17, very light, and single 55 tooth Campag piste chain ring. The original intention was to use 170mm Royce piste cranks but I used Campag 177.5mm, extra leverage being the reason and I couldn’t source Royce cranks of that length. There was an overlap of front wheel and shoes but as time trials are straight lines it didn’t really matter. Bottom bracket shell is a Saba precision with a titanium Royce bottom bracket. The bottom bracket is stamped with my name and my post code at the time, LU6 3LR. Lugs are spear point and cut out, again to keep the weight down. I lightened several components by hand filing, by this time the fashion for drillium was on the wane, so I filed the gear lever and brakes and removed the ends of the handlebars and seat pin. The narrow end of the stem expander bolt was also sawn off. Steel chainring bolts replaced with alloy items. Rear gear is a Huret jubilee, the lightest available at the time, but a rapid rear wheel change was tricky.
My diary records the list of components.

After a few seasons of racing, and corrosion caused by sweat, a respray was required, plain white without SP decals. It remains as such to this day, although now in a terrible state, but the frame is sound.

Update August 2017: Tim has had his bike restored to its former glory by Chris Davey. It looks amazing. See below for images. 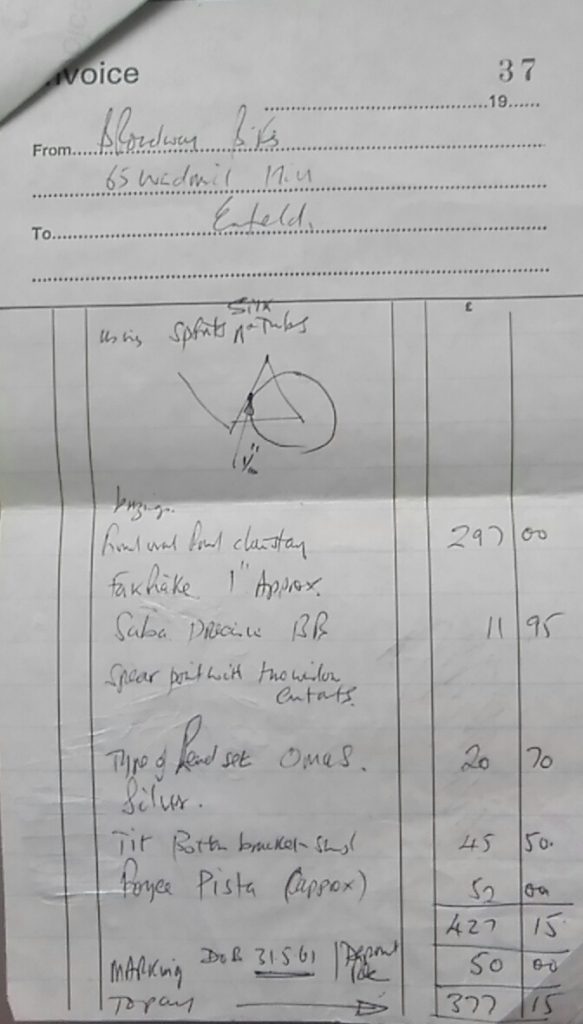 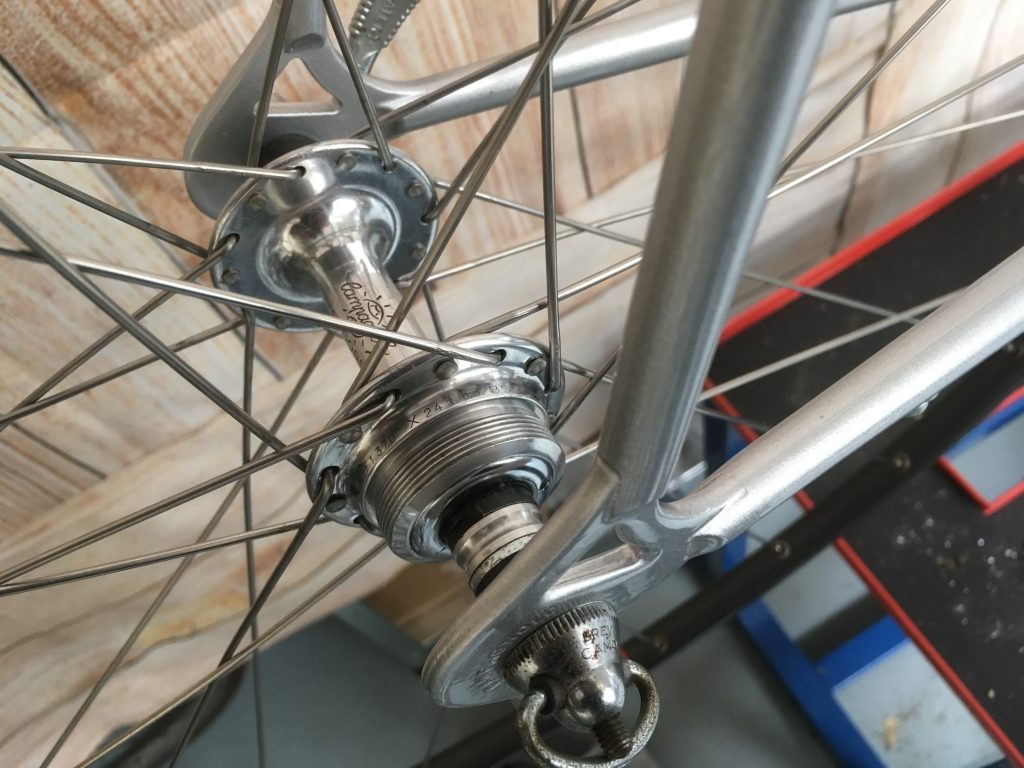 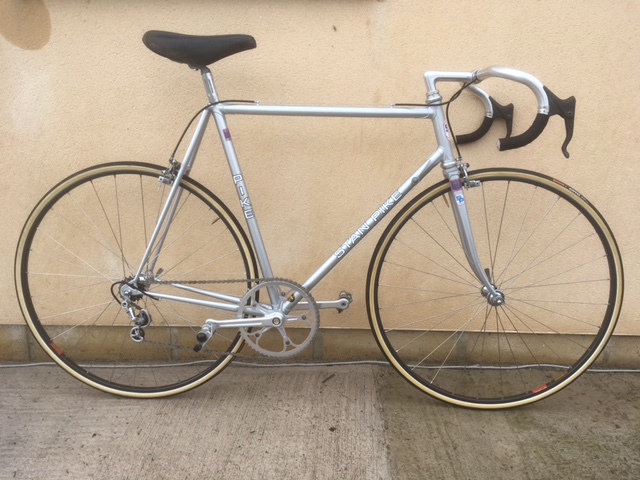 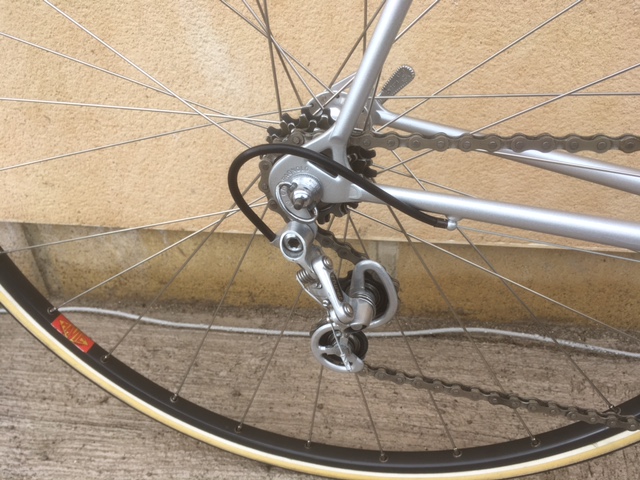 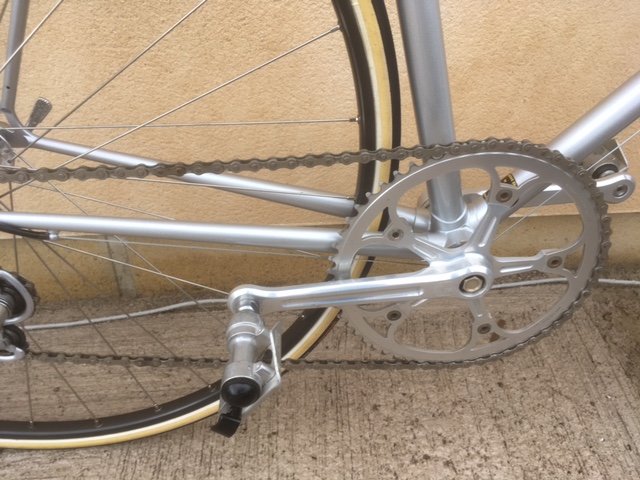